"... In an age where digital technology has given rise to a proliferation of filmmakers with nothing but commercial dreams in their heads for their moribund creations, this remodernist group of filmmakers is dreaming and believing in something else. And actually doing it. In Passing is an intriguing and exquisite work..." - Bill Mousoulis, Senses of Cinema

1. Art manifestos, despite the good intentions of the writer should always “be taken with a grain of salt” as the cliché goes, because they are subject to the ego, pretensions, and plain old ignorance and stupidity of their authors. This goes all the way back to the Die Brücke manifesto of 1906, and continues through time to this one that youʼre reading now. A healthy wariness of manifestos is understood and encouraged. However, the ideas put forth here are meant sincerely and with the hope of bringing inspiration and change to others, as well as to myself.

3. Cinema could be one of the perfect methods of creative expression, due to the ability of the filmmaker to sculpt with image, sound and the feeling of time. For the most part, the creative possibilities of cinema have been squandered. Cinema is not a painting, a novel, a play, or a still photograph. The rules and methods used to create cinema should not be tied to these other creative endeavors. Cinema should NOT be thought of as being “all about telling a story”. Story is a convention of writing, and should not necessarily be considered a convention of filmmaking.

4. The Japanese ideas of wabi-sabi (the beauty of imperfection) and mono no aware (the awareness of the transience of things and the bittersweet feelings that accompany their passing), have the ability to show the truth of existence, and should always be considered when making the remodernist film.

5. An artificial sense of “perfection” should never be imposed on a remodernist film. Flaws should be accepted and even encouraged. To that end, a remodernist filmmaker should consider the use of film, and particularly film like Super-8mm and 16mm because these mediums entail more of a risk and a requirement to leave things up to chance, as opposed to digital video. Digital video is for people who are afraid of, and unwilling to make mistakes.** Video leads to a boring and sterile cinema. Mistakes and failures make your work honest and human.***

6. Film, particularly Super-8mm film, has a rawness, and an ability to capture the poetic essence of life, that video has never been able to accomplish.***

7. Intuition is a powerful tool for honest communication. Your intuition will always tell you if you are making something honest, so use of intuition is key in all stages of remodernist filmmaking.

8. Any product or result of human creativity is inherently subjective, due to the beliefs, biases and knowledge of the person creating the work. Work that attempts to be objective will always be subjective, only instead it will be subjective in a dishonest way. Objective films are inherently dishonest. Stanley Kubrick, who desperately and pathetically tried to make objective films, instead made dishonest and boring films.

9. The remodernist film is always subjective and never aspires to be objective.

10. Remodernist film is not Dogme ʼ95. We do not have a pretentious checklist that must be followed precisely. This manifesto should be viewed only as a collection of ideas and hints whose author may be mocked and insulted at will.

11. The remodernist filmmaker must always have the courage to fail, even hoping to fail, and to find the honesty, beauty and humanity in failure.

12. The remodernist filmmaker should never expect to be thanked or congratulated. Instead, insults and criticism should be welcomed. You must be willing to go ignored and overlooked.

13. The remodernist filmmaker should be accepting of their influences, and should have the bravery to copy from them in their quest for understanding of themselves.

14. Remodernist film should be a stripped down, minimal, lyrical, punk kind of filmmaking, and is a close relative to the No-Wave Cinema that came out of New Yorkʼs Lower East Side in the 1970ʼs.

15. Remodernist film is for the young, and for those who are older but still have the courage to look at the world through eyes as if they are children.

** The only exceptions to Point 5 about video are Harris Smith and Peter Rinaldi; to my mind they are the only people who have made honest and worthwhile use of this medium. (Aug. 2008) ***The position on digital/video has changed since this manifesto was written in 2008- the group is inclusive toward use of any motion picture format. 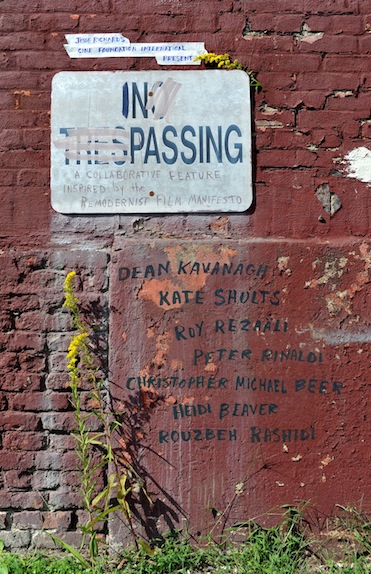